It was a good and bad day today. Good because the fog and clouds lifted as we ascended further up the valley…finally giving us a clear view of Everest, Ana Dablam and Nupse.

But it was also a bad day because Tim has caught a nasty case of the flu/cold (and possibly altitude sickness)- he’s got symptoms of a stuffy and runny nose, sneezing, shortness of breath, headache and general “awfulness”. He had a real hard time ascending up to Dingboche and so had to take many rest stops. But slowly and patiently we made it there in fairly good time (3.5hours). I had a hard time breathing as well; I can’t imagine what it would be like to have a cold on top of Altitude Mountain Sickness. Luckily we have an acclimatization day tomorrow so Tim will have a full day to rest. 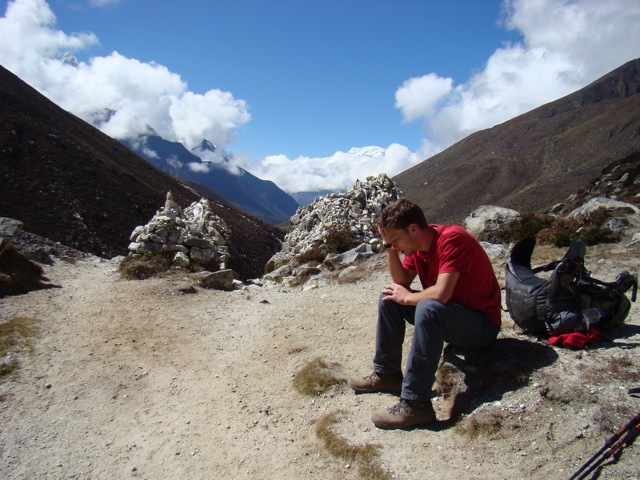 (Tim not feeling too well enroute to Dingboche) 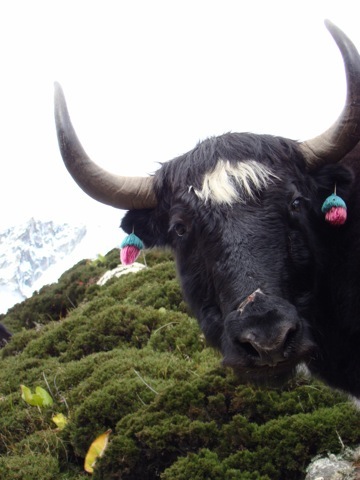 (Encountered many yaks along the trail. You really don’t want to get bumped off the trail by these big beasts.)

We’re staying at a strangely named lodge called Hotel Ari-zona. The family that owns the place is really friendly and the lodge has a nice solarium upstairs, which is nicely toasty warm from the sun- a perfect place for Tim to rest and recoup. The solarium also offers awesome views of the surrounding mountains (and unlimited view of Ana Dablam). It will certainly provide some inspiration for me to do some sketches tomorrow!

We’re paying an excellent price for our accommodations- only 100Rs for a room (two single beds obviously)/night. The meals are getting pricier though…the sherpa stew that I had for lunch was 170Rs, which would usually go for 100Rs south of Namche. I guess we’re paying “porter” tax for having our food carries all this way.

It’s now evening and I’m developing a headache now. Doesn’t help that I’m peeing buckets too (but it’s a good sign that your body is acclimatizing).

I walked around Dingboche this afternoon while Tim rested and slept. It’s a nice village- but now and then you get these gawd-aweful looking new lodges placed inbetween shacks or farmsteads with corrals. The village is quite nice despite some of these lodges; it’s very open and provides awesome views of the mountainscape. 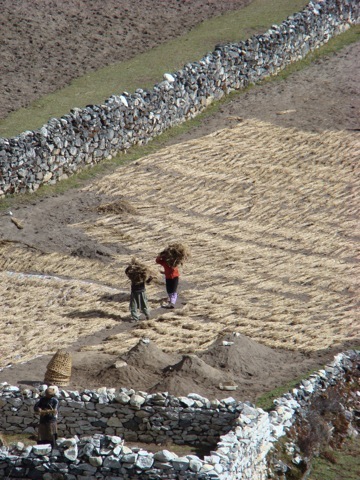 Pheriche, a village in the next valley over, is an alternative stop over to Dingboche but it’s in a narrow valley that doesn’t get much sun and doesn’t provide as good of views compared to Dingboche. I’m glad we chose to stay here (it was a toss between Pheriche and Dingboche when we came to the fork in the trail).

I was also on a mission this afternoon to find a water source (stream) to wash my socks and undies. While on my walk I befriended a young Nepali man Karma, a 16 year old friendly chap who was looking for some company. He was a guide/porter to an “old” European lady and he said she didn’t talk much and was really boring to hang out with. Of course he thougth I was Nepali and was intrigued by the fact I was Canadian. So we had a good walk and chat at the stream while I washed my undies in front of him- I was a bit embarrassed to show him my underwear but whatever.

We had a “lie-in” this morning as Tim would say. Translated in Canadian means that we slept in and slowly got up at 8am. Every lodger was in the solarium already eating breakfast. I woke up twice in the middle of the night to run to the outhouse for really long pees- still acclimatizing, even when I sleep!

We had a wonderful breakfast of champa and rice porridge (the cook even gave us extra free helpings because she cooked too much). Tim was feeling abit better today and so we decided to test his strength by heading out for a short walk. We walked part way up the ridge and took photographs of some fantastic scenery. 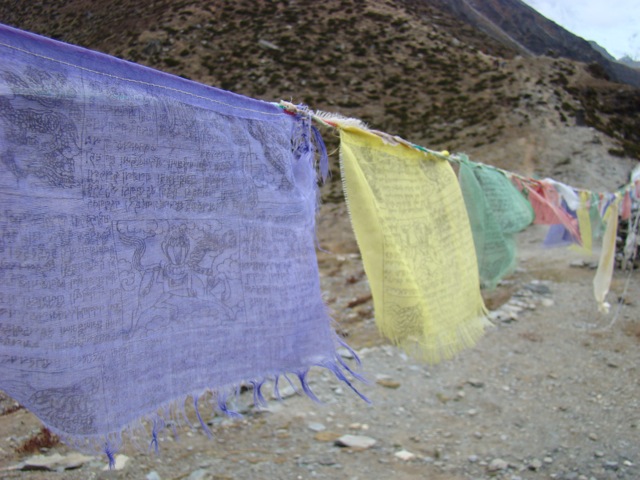 After a few attempts of sketching mountains using my fancy Staedtler sketching pens, I managed to sketch a decent drawing of Ana Dablam. I gave the sketch to Tim to cheer him up.

Tim was feeling well enough to push on to Thukla (also spelled Dughla) today. A very short day of 2.5hours of trekking. Tim did very well despite his shortness of breath on the uphills.

(Tim and Ana Dablam in the background) 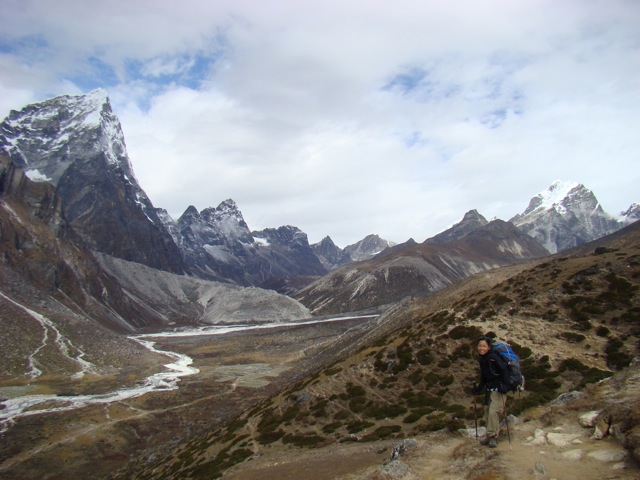 (Me enroute to Dughla)

Thukla is nothing more than a teahouse/lodge in the middle of seemingly nowhere (there’s only one decent place to stay- the Yak Lodge, the other two are porter/tea lodges). Most trekkers often decide to push onto Lobuche, which we could have done if Tim was feeling better. But it was a good thing we did stop when we did because two hours later it started to heavily snow at around 2pm. Many trekkers started to pile into the lodge looking for shelter and many said they found the trail very slippery to walk on. The sky cleared by 6pm and made for some nice photoshoots.

I finished Sir Edmund Hillary’s memoir “View from the Summit” this afternoon. I couldn’t help but cry when I read about his wife and daughter’s deaths (devastating plane crash). Tim was poking fun of my sensitivity but I assured him that he will be crying too when he reads the book.

Tim spent a ridiculous 4 hours tinkering away at his camera which attracted alot of Sherpas’ attention- they just stood around and watched him surgically gut his camera. Tim surprisingly managed to piece it back together with some “spare” parts left over. LOL. Unfortunately the shutter was still broken.

Tommorow we’ll be pushing on to Gorak Shep (~500m elevation gain, despite the acclimatization guidelines). We’ll play it by ear but I’m sure we’ll be able to push past Loboche as Tim’s feeling alot better now.

-The owner/manager’s little son has a Himalayan pup, which mostly stays in the kitchen. If we were in any other place than the middle of nowhere Nepal, it would have been unacceptably unsanitary. But I enjoyed the pup’s behavior, watching it zip in and out of the kitchen into the lounge/common area, only to be chased back into the kitchen by the shouting owner/manager.

-Had some awesome dal bhaat today with Nepali chili (had to specially request it). They even gave us a round of seconds (which is how it is traditionally served).