Sorry to all my fans out there (ha, as if I have any!). I’ve taken a bit of a hiatus from blogging. It was over a year and half ago since my last post!

Many things have happened since – we celebrated Darwin’s 2nd birthday in February 2014; I was pregnant but suffered a miscarriage at 4 months and gave birth to Mira and mourned her passing in April 2014; we moved out of our downtown condo and back with my parents in summer 2014; took off to southeast Asia for 3.5 months from Nov 2014 to Feb 2015; gave birth to a healthy girl in April 2015.

I’m now on maternity leave for a year – hurray! it’s been a crazy time but really enjoying the moments with my precious daughter Sierra. We named her after the highlands/mountains in Ecuador.

I’ve attached a recent photo of our family and of Sierra at 1 week old. I promise to post more photos as time permits but I’m sure this year will fly as quickly as last year! 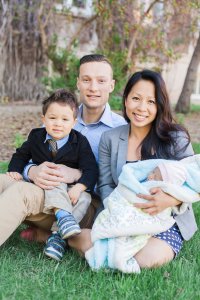 2 thoughts on “Gosh it’s been awhile!”