Wishing it was summer, but unfortunately my school semester starts February and ends October. Finished my one and only final exam today and I feel goooooood. Looking forward to having my evenings and weekends free. Darwin will actually get to have a full weekend with mummy since I’ve been pawning him off to my sister every Saturday for the past two months.

Looking forward to writing more blog posts, there’s so much to catch up on!

The WordPress.com stats helper monkeys prepared a 2012 annual report for this blog.

It’s been a hectic month or so of cramming/study, but final exams are over- Hurray! I’m now half way to completing my MSc (i.e. 3 more years to go- ugh).

Feels great to have my evenings off; I’m now focusing my attention on preparing for our trip to Ecuador (2.5 months, sooooo awesome). We’ve dedicated every night to learning Spanish- there’s a fairly decent (and free!) Spanish on-line tutorial http://spanishdict.com that we’re using. The tutor/teacher Paralee is annoyingly enthusiastic, but if you see past her gleaming smile, the lessons are quite helpful.

There are other things that I need to list out, like what to bring for baby in terms of meds, carriers, crib, clothing, food, etc. I’m determined to bring Darwin’s travelling cot/crib (by Phil and Ted) which only weighs 5.5lbs without the mattress and can easily fit into my backpack. I also purchased an awesome baby carrier by Osprey (Poco series) and totseat for mealtime (see pics below). Darwin’s going to be the best equipped travelling baby ever!

Waaaaaaaaaaaaaaaaaaaaah! Oh well, I’m grateful to have had the time off. Tim and I moved into a downtown condo so time was needed for the packing and unpacking. We had some dedicated friends help with the move- I was pretty useless, except for directing where furniture was to be placed. I’ll post some photos of our new home just as soon as I get settled into a routine again. Just wanted to pop by and wish my readers a HAPPY NEW YEAR!

Last week, Tim and I went on our honey(baby)moon to San Francisco. We had an awesomely wonderful time- so much to see, do and EAT. Places are full of character, and the people are friendly and laid-back. Best of all, the public transportation system makes it really easy to get around. Despite my baby belly (and small bladder), I didn’t have any trouble walking up and down the hilly streets. Not surprisingly I did suffer from sore feet after the 10+km of walking we would do each day!

We toured the City for 4 nights and stayed at the Majestic Hotel. Not sure if I’d recommend staying there as the room was pretty basic (nice 4 poster bed!) and the hotel staff were so depressing (never once cracked a smile). We liked the fact that the hotel was walking distance to Filmore St (trendy shops, cafes and restaurants- like Whyte Ave but 100X better) and Japantown. I probably wouldn’t recommend staying at the Wharf (though many visitors do)- it’s way too touristy with many cheezy crap shops and restaurants. You are however close to the water and bike/walking paths, which is bonus. I guess it doesn’t matter where you stay in San Fran ’cause the public transportation is convenient and accessible. We felt pretty safe in the City- Mission District and Tenderloin District (especially) can get abit sketchy so I would avoid these areas at night.

<Photo caption: L to R- Tim and I at the “Crookedest Street”; Tim and I packing “light”- these day packs were all we took on our trip!; Occupy San Francisco before it was demolished the next day; One of the many cable car lines in San Fran- a shame downtown Edmonton decommissioned its cable cars, it could have been the San Francisco of the North!> 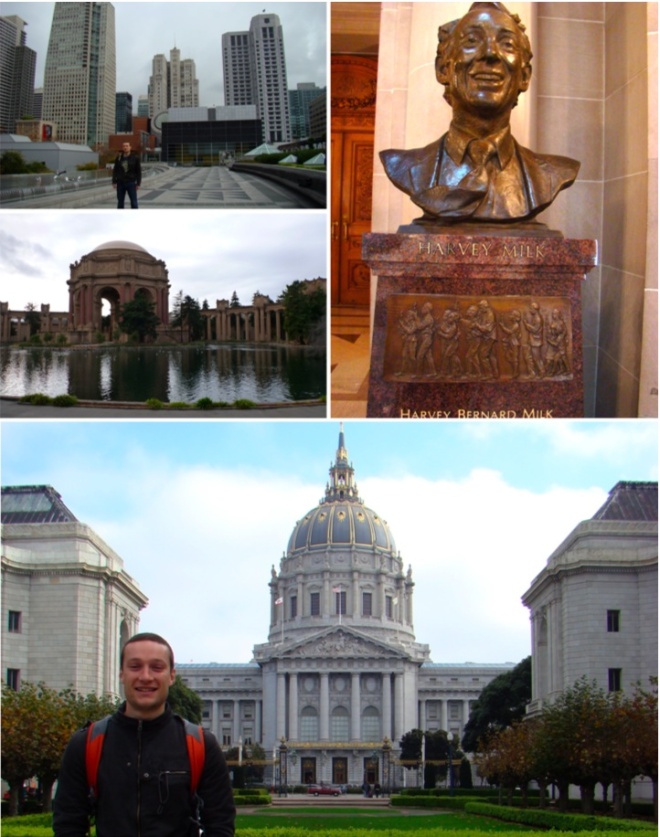 <L to R: Yerba Buena Gardens; Harvey Milk bust at the City Hall in memory of his death; Palace of the Arts; Tim in front of City Hall- built in Beaux-Art architecture (by an Authur Brown Jr who also built the opera house and Coit Tower.)>

<Totally worth the $25USD- includes the ferry ride (return) and park pass (it’s a National Park). There’s an audio tour (very worthwhile); and free guided tours throughout the day. Suggest to go early before the island get overcrowded. Also suggest to book your tickets in advance (we booked ours online here). Tip: TIm and I watched the Clint Eastwood movie “Escape From Alcatraz” before our trip- puts everything you see into context!> 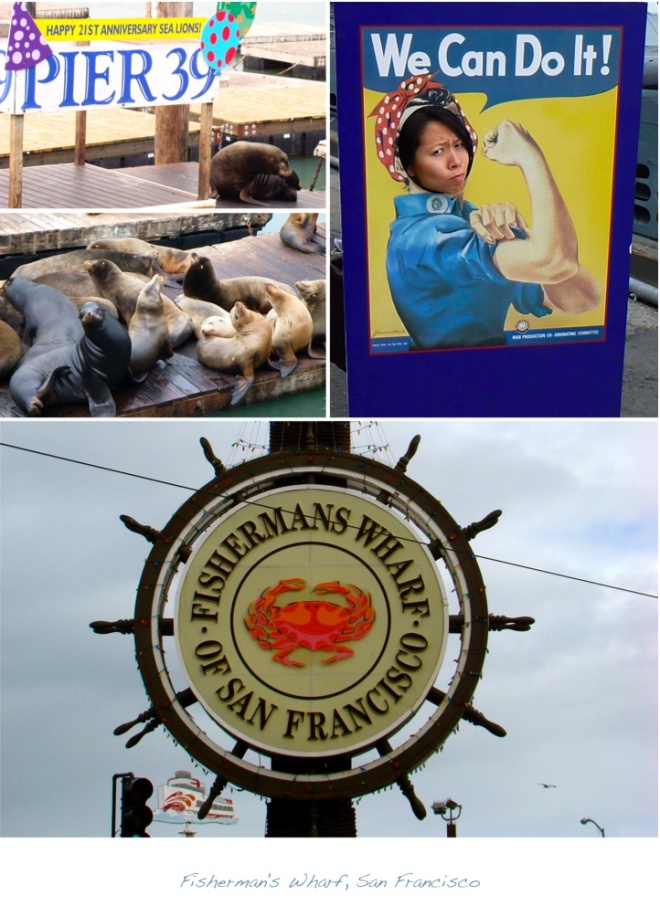 <Although touristy, it is worthwhile to check out (especially to eat the seafood!). The sea lions were pretty entertaining- these friendly creatures starting arriving on the pier after the 1906 earthquake that affected their food supply/migration patterns. Other Districts/areas worth checking out is the Castro (gay) district, Haight-Ashbury (hippy/grunge) district and Golden Gate Park.>

<Surely everyone rants and raves about the food in San Fran. It’s fresh and very ethnically diverse. Mission District- best and cheapest latino eats- see picture above of taco ($2), something in banana leaf ($2) and BBQ sandwich ($8); Chinatown- had awesomely delicious and cheap claypot chicken dinner for two, only $18; Little Saigon- tasty viet subs for $3.50 each; In-N-Out burger- all the craze in the US (see picture above) and don’t understand why??; And just about in any decent restaurant you can get fresh seafood- crab, raw oysters, sushi, seafood chowder in a sourdough bowl (see pic above), cerviche…yum!>

I forgot how much fun it is to travel with Tim- he’s constantly making me laugh and really easy-going. So happy that we went on our honeymoon and took time to enjoy eachother’s company…once baby arrives, I’m sure these opportunities will be far and few between! 😉 Thank-you to those who contributed to our honeymoon trip!

We filled our day with good eats, tobogganing and vietnamese bingo- what a great day!  Wishing everyone a great holiday season and New Year!

<Vietnamese Bingo- Tim and I managed to win a whopping $20!>

P.S. My brother Phong and Christine are engaged to be married! Happy times! I’m sure a formal announcement will likely follow…stay tuned!